Where We Live presented by THISISPOPBABY with St. Patrick's Festival

THISISISPOPBABY's ferocious response to the theme of home, told by some of the best storytellers on the Island 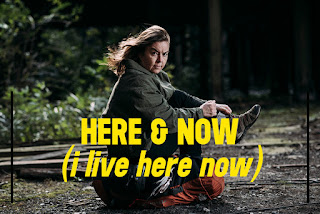 On 27 November 2011 Veronica Dyas reached the end of the Camino de Santiago and knew that everything had to be different. She returned to a house that was never really her home, 100k in negative equity with mortgage arrears*. One year to the day later, she handed her keys to an estate agent and become an unlikely landlord / part of the problem.
Our land is coveted by speculators. It’s a high rents housing crisis all over again, but even worse this time, while people die on our streets and more than one in three of those sleeping in emergency accommodation is a child.
We’re counting numbers instead of lived experiences, and we’re manipulating those figures too.
HERE & NOW (i live here now) traces one woman’s journey from social housing through private ownership to the nomadic. While attempting to navigate new spiritual terrain, Veronica is asking what do we really need to live HERE & NOW?
*1 of 83,251 (August 2012), 1 of 136,564 (March 2014), 1 of 73,706 (June 2017) in Mortgage Arrears of 90 days or more - Central Bank of Ireland Statistics
Created and performed by Veronica Dyas  / Directed by Amy Conroy
Developed in residency at FRINGE LAB with the support of Dublin Fringe Festival

The purpose of this blog is to provide a public record of the research, process of developing, and documentation of presentation in stages of the creative research project HERE & NOW and as an active means of processing the experience and to explore means to share that process afterward.